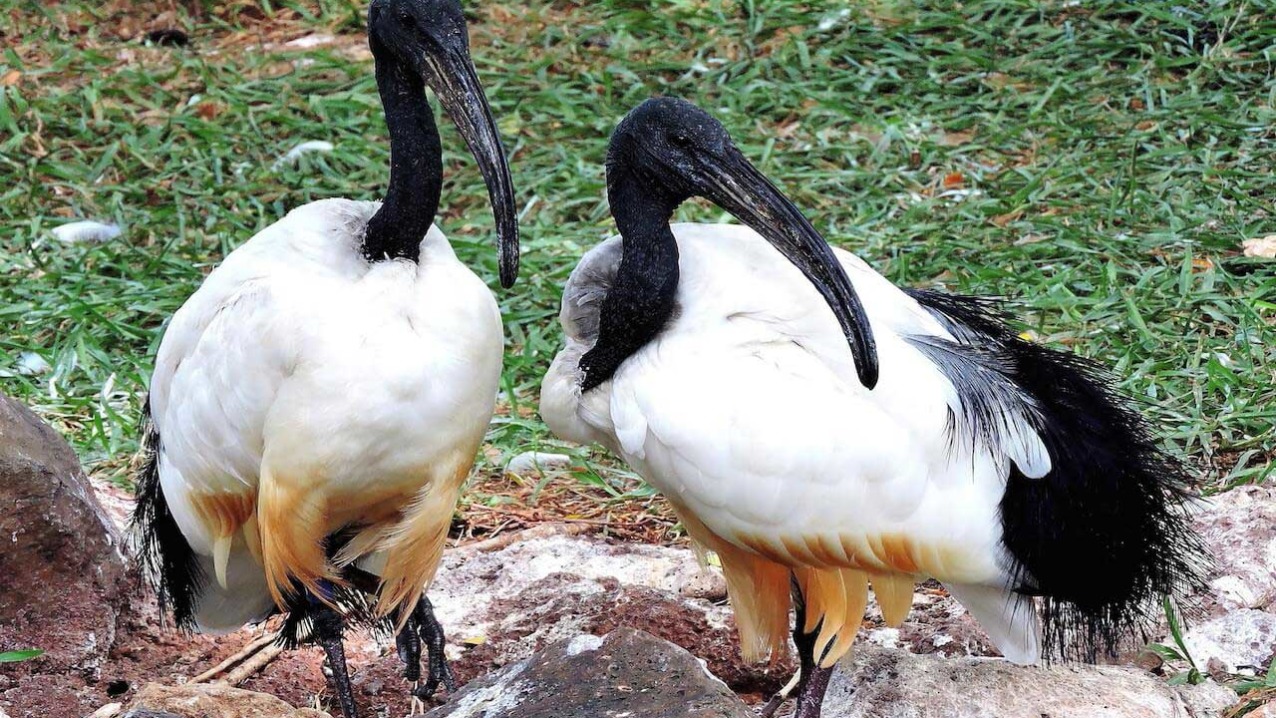 The Roseate Spoonbill stands about 30 inches tall and has a heron-shaped body. The legs and eyes are red, and the feet and knees are blackish. The body is pink. During breeding their plumage can be a bright red or magenta color on their wing shoulders. Wing span is 3-4 feet. The tail is a tawny orange color.

Ibises have long legs and long decurved (down-curved) bills. They are closely related to spoonbills. The Hadada Ibis and the Sacred Ibis are similar in size–about 30 inches long. Males and females of each species are similar in appearance.

The Sacred Ibis is black and white. All of its feathers are white except for tail and wing tips. Naked head and neck, legs, and feet are black.

Several ibis species inhabit wet portions of the African savanna. The Hadada Ibises especially like wooded streams. They are common residents throughout Africa in suitable habitats including swamps, marshes, flooded areas, edges of lakes, pastures and rivers with treed banks.

Sacred Ibises are common in East Africa and are found throughout Africa south of the Sahara. They frequent marshes, swamps, riverbanks, pastures and plowed fields. They were once common along the Nile River, but have been absent from Egypt for over a hundred years.

Most ibises are highly social–they nest, rest, feed and fly in large groups.

Ibises usually roost in temporary communal roosts located near feeding grounds. They may share the roosting areas with herons, cormorants, storks or other ibis species.

These birds feed by touch rather than sight. They probe the mud and search under water for slow moving animals such as fish, insects, crustaceans and amphibians. They also eat scraps of carrion.

Most ibises are colonial nesters, and sites can include many thousands of birds. Most ibises nest in bushes.

Males display then eventually choose a mate. The pairs then engage in mutual bowing and display preening. Males usually gather nest materials, which they ritually offer to their mates.

Both sexes incubate the eggs and feed the young. Nestlings feed on regurgitated food, which they get by inserting their bills down the parents’ gullets.