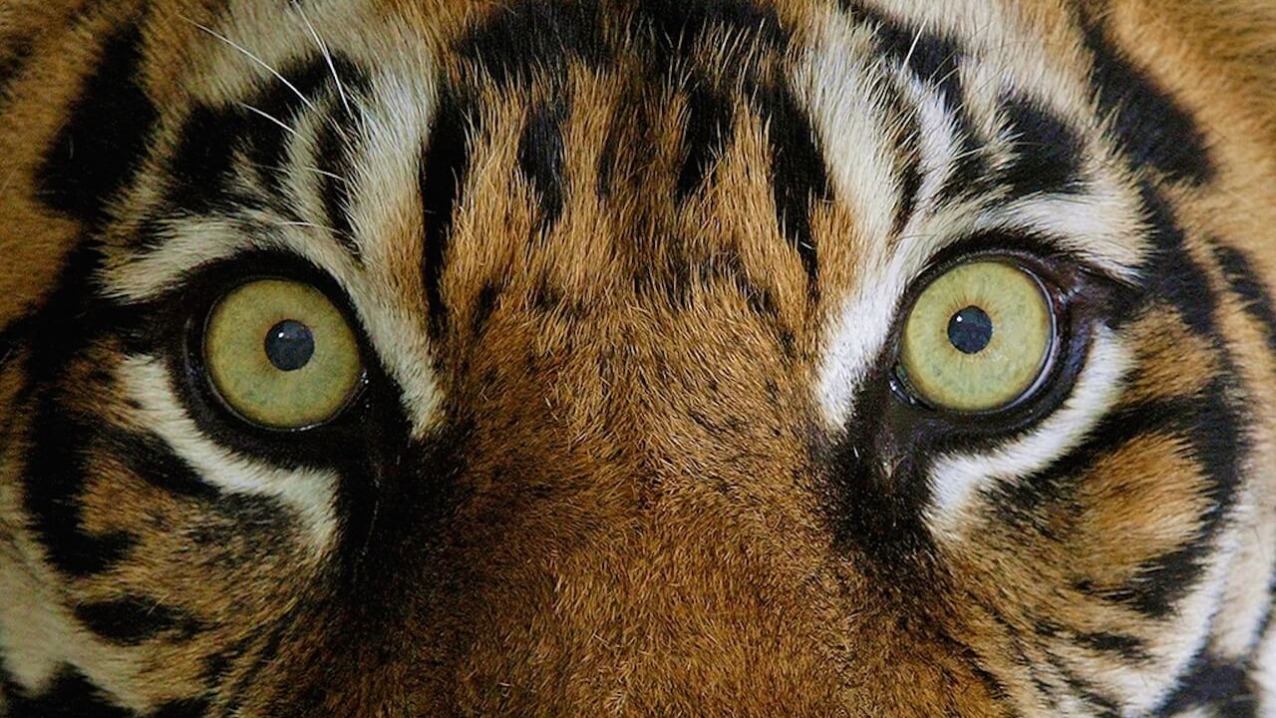 The Sumatran tiger is the smallest of the tiger subspecies as compared to the Siberian tiger which is the largest. Sumatran male tigers average 8 feet in length (2.4 meters) from head to tail and weigh about 265 pounds (120 kilograms). Females average 7 feet in length (2.2 meters) and weigh about 200 pounds (90 kilograms). The smaller size of the Sumatran tiger makes it easier to move quickly through the jungle.

The Sumatran tiger is the smallest of the tiger subspecies as compared to the Siberian tiger which is the largest.

The smaller size of the Sumatran tiger makes it easier to move quickly through the jungle. Also, their stripes are narrower than other tiger species. The tiger’s patterned coloring is an adaptation for camouflage in their natural habitat, which is often tall grass. The males, especially, have a more bearded and maned appearance — neck and cheek hair are well developed.

Webbing between their toes, when spread, enables the Sumatran tiger to be very fast swimmer. They will, if given the chance, run hoofed prey into the water who are much slower swimmers.

The white spots on the back of tiger’s ears are called “eye spots” or “predator spots”. These spots are believed to function as false eyes as well as to make it look larger to any predator approaching from behind. This is particularly helpful in keeping cubs safe.

The Sumatran tiger is found only on the Indonesian island of Sumatra in habitat that ranges from lowland forest to sub mountain and mountain forest including some peat moss forests. According the the Tiger Information Center and the World Wildlife Fund there are no more than 500 of these tigers left in the wild with some estimates considerably lower.

Sumatra has undergone much agricultural growth and as a result, tiger habitat has become fragmented with about 400 tigers inhabiting five National Parks and two Game Reserves. The largest population of about 110 tigers lives in Gunung Leuser National Park. Another 100 live in unprotected areas that will soon be lost to agriculture. The tigers that live in unprotected areas are very vulnerable to poaching as well as the killing of problem animals that come in contact with villagers encroaching upon the animal’s habitat.

The continuing loss of habitat is intensifying the crises to save this tiger.

The extent of a tiger’s range varies according to habitat and availability of prey. Its sight and hearing are very acute, accounting for the tiger being such an efficient predator. The tiger lives alone for the most part, and there is only occasional cooperation between different individuals. A male will not tolerate other males staying in his territory, but will permit other transient males to move through his area.

A female uses her territory only for hunting, while the territory of a single male can overlap with those held by several females. The tiger emerges to hunt at dusk, and may travel more than 20 miles in a night.

The hunting method is slow and patient, stalking through often dense cover until close enough to spring. Tigers in general tend to attack prey from the side or rear at close range and when the prey weighs more than half that of the tiger, a throat bite is used and death is caused by suffocation. They will kill whatever they can catch, including fish, crocodiles and fowl, with the most common larger prey being wild pigs and deer.

Interestingly, is has been learned that one of the main reasons orangutans spend a minimal amount of time on the ground is from fear of tiger attack.

The tiger is one of only two cats that enjoys being in water (the other is South America’s jaguar). The Sumatran tiger may often be found in a pool or stream, or standing in water to keep cool.

Male and female tigers mark their ranges by spraying scent on trees or bushes.

In the Zoo the tigers are fed an assortment of fish, meat and poultry parts.

Tigers can breed at any time of the year, but they typically mate in winter or spring. Tigers appear to reach maturity at about 4 years of age, although earlier maturity has been recorded. Gestation is normally 103 days. The usual number of cubs is two or three, though there may be as many as six.

The cubs are blind and helpless at birth weighing about 3 pounds each. Their eyes usually open by the tenth day, although some zoo-born cubs have their eyes open as soon as they are born. During the first 8 weeks the cubs consume only their mother’s milk. They are suckled for 5 or 6 months.

The cubs leave the den for the first time when they are 2 months old. They are wholly dependent until they are about 6 months old when they learn how to kill. They can hunt for themselves by the time they are about 18 months old and are fully independent at two years of age. Longevity in the wild is 15 years and 20 years in captivity.

Sumatran tigers are critically endangered. The Indonesian Sumatran Tiger Conservation Strategy has been established by the Indonesian Ministry of Forestry and it outlines management strategies for both wild and captive tiger populations.

Even without any further losses of these magnificent animals,, the present populations are so small that they are vulnerable to severe environmental catastrophes, as well as genetic problems typical of small populations.

Indonesia has 65 captive Sumatran tigers living in zoos, 85 in European zoos and 20 in Australian zoos. There are 70 tigers managed by North American zoos of which the Honolulu Zoo has three adults and three juveniles. Our younger male and female pair produced three male offspring in 2008. The entire captive population is descended from 37 wild-caught founders. To find out more about captive management of Sumatran tigers check out this site: Tiger Global Conservation Strategy.

It is now illegal to hunt tigers, however, this has not stopped the poaching of these animals for tiger products. China, by virtue of its large population, is the largest consumer and producer of manufactured products containing tiger parts.

Outside tiger range countries, large numbers of bones ands other tiger products have been found in Taiwan and South Korea, many of which were from Indonesia. A great number of these medicinal tiger products are also consumed by Asian-Americans in North American cities, who can afford the expensive prices. The World Wildlife Fund has recently made progress working with the Schools of Chinese Medicine in North America to change attitudes toward the use tiger products.

At the turn of the century, there were probably over 100,000 tigers roaming the forests of central and southern Asia. There are now only about 6,000. Three of the eight sub-species of tiger are already extinct.