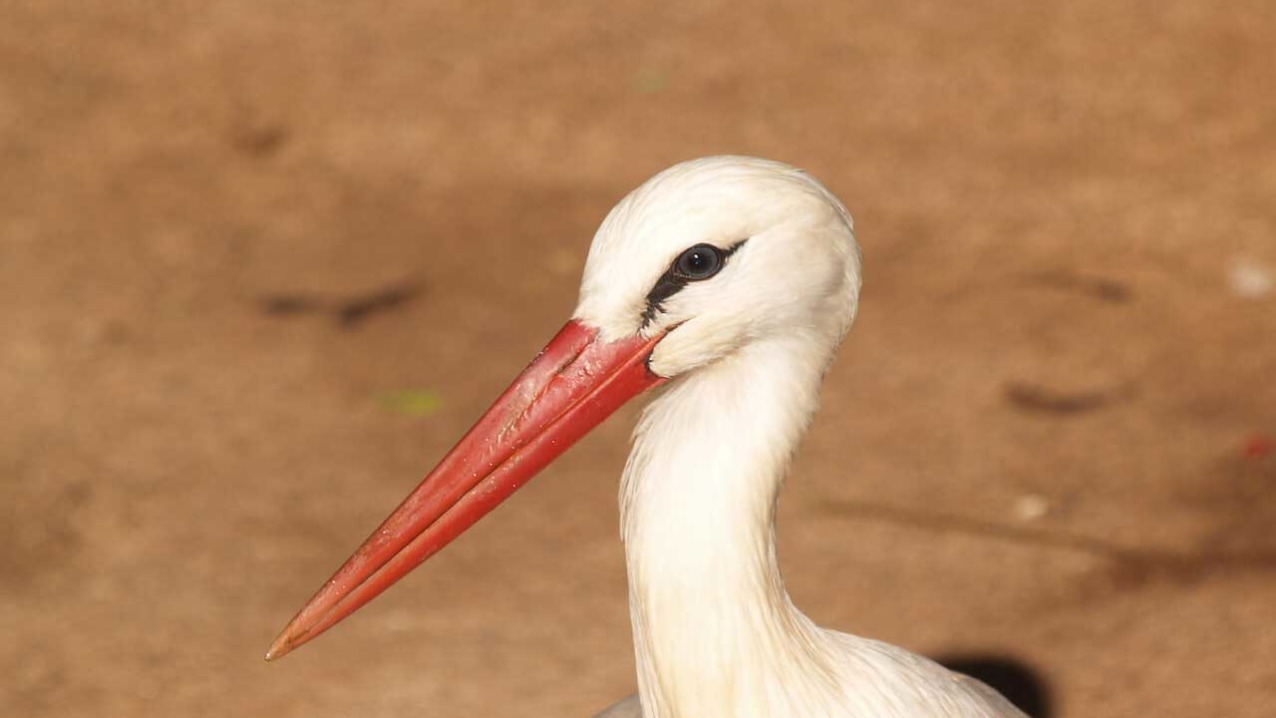 Storks are almost voiceless; the only sound they make is a clattering of the beak. They are completely diurnal in their hunting and are usually found in flocks, but split into pairs during the breeding season. The White stork feeds on frogs, snakes, lizards, small rodents and insects, found in in marshy areas. The Marabou stork feeds mainly on carrion, the decaying flesh of dead animals.

There are 17 species of storks, all with stout bodies, long slender legs and slightly webbed short toes. Their claws are blunt and nail-like. Like birds of prey, young storks have two successive coats of down.

The White stork of Europe and Asia, is also protected in Africa, where it winters.

It has a strong body, a long, straight conical bill with cutting edges, white plumage with black wing coverts and flight feathers and long pointed feathers directed downward under the neck. The adult bird attains a length of four feet and has a wingspan of nearly seven feet. Males may weigh up to 10 pounds.

The Marabou stork, Leptoptilos crumeniferus, is a tall, shy bird, swift enough to catch live prey with its huge bill. When feeding on carrion it thrusts its bare, scabby, flesh colored, black-spotted head deep inside the body cavity of the dead animal. The are appreciated for their efficiency in reducing disease by cleaning up carcasses and other rubbish. the will eat just about any kind of animal dead or alive, including pelican chicks, young and adult flamingos, cormorant nestlings, crocodile eggs and hatchlings, fish and bugs. They rely on vultures to open up the tough hides of dead animals.

Hanging a foot or more below the throat is an inflatable subcutaneous air sac called a gular sac. This unattractive appendage is not a part of the throat. There is a second medium sized bulbous sac that protrudes from the feathers of the upper back which is concealed by the feathers when not inflated.

At one time the fine white undertail-covert feathers were in great demand by the millinery trade. (The scientific name Leptoptilos, Lepto meaning fine and ptilo meaning feather refers to those covert feathers).

The male Marabou can be up to 1.5 meter tall and weigh up to 10 kg., making it one of the largest flying birds in the world. They nest in colonies and with other species of storks, pelicans, herons, egrets and ibises. these colonies may number anywhere from 20 pairs to thousands.

There are three species of Marabou stork in Asia, India, and Africa. They are commonly seen in tropical southern Africa. They have adapted quite well to human activity and in some places their numbers are actually on the rise.

Storks are almost voiceless; the only sound they make is a clattering of the beak. They are completely diurnal in their hunting and are usually found in flocks, but split into pairs during the breeding season.

The White stork feeds on frogs, snakes, lizards, small rodents and insects, found in in marshy areas. The Marabou stork feeds mainly on carrion, the decaying flesh of dead animals.

Most storks mate for life. The nest is a solidly constructed platform of sticks, which may be built on trees or ledges. In February or March the male arrives at his old nest to await his mate, and as soon as they are together again, they begin rebuilding the old nest. With the passing of years, some nests have been found measuring over eight feet in diameter, eight feet in depth, and weighing more than 100 pounds.

The female lays from two to five chalky white eggs, laid at two day intervals. Incubation is shared by the parents and usually lasts about a month.

When hatched, the chicks are covered with short, white down, which is replaced eight days later by a second coat of the same color. Far from being silent like their parents, the young whine, croak and whistle and begin the typical beak clattering. Food is laid on the edge of the nest by the parents but water is provided by regurgitation.

At two months of age they are able to make their first flight accompanied by the parents who still watch over them and teach them to hunt. Soon after the “teaching flight” the bond is broken and the young birds disperse. A month later, all fly off to their winter quarters in Africa.

Although protected almost everywhere today, storks are diminishing in all countries where they once nested in great numbers. The decrease has been attributed to the drying up of marshy regions and to the increased dangers from lighthouses, beacons and high-tension cables encountered during migration.