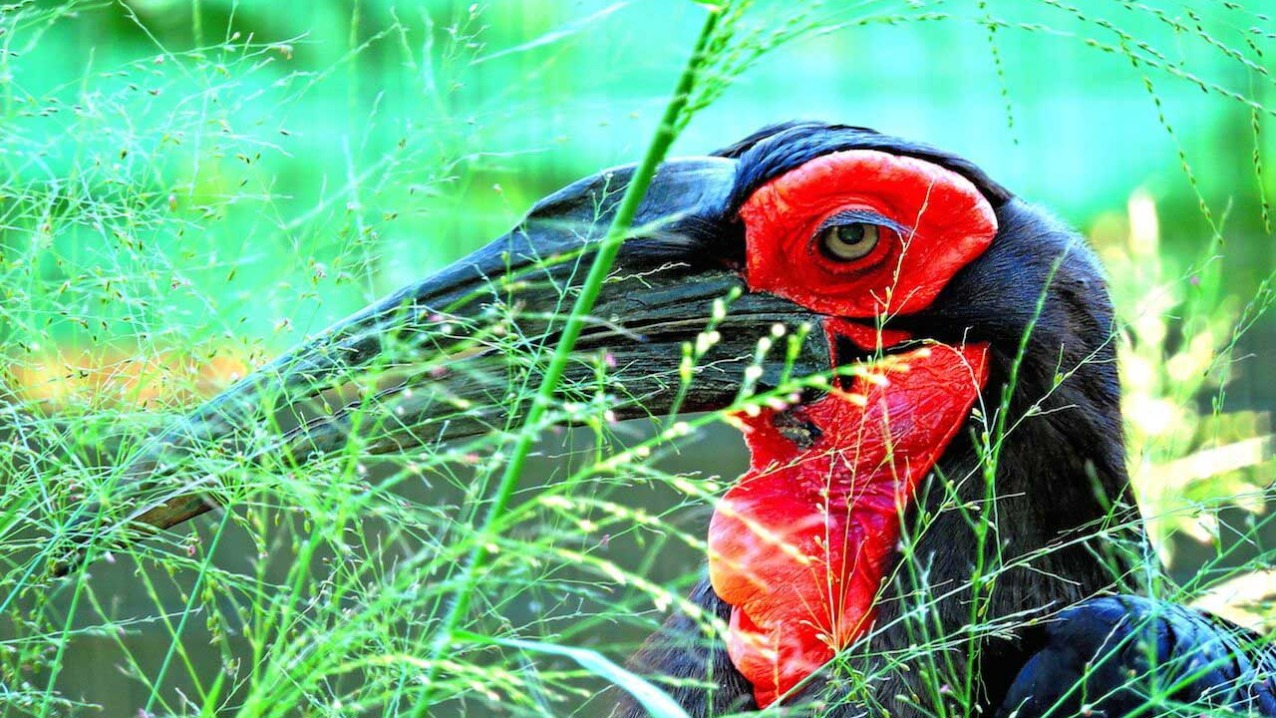 The ground hornbills are the only ground dwellers among hornbills. The large bill characteristic of the Bucerotidae family may be why hornbills are the only birds with the first two neck vertebrae (axis and atlas) fused together. Hornbills are notable for their long eyelashes and rather stubby legs and toes, with broad soles and the bases of the three front toes partly fused.

Hornbills are notable for their long eyelashes and rather stubby legs and toes, with broad soles and the bases of the three front toes partly fused.

The African Ground hornbill’s throat skin is inflatable, and sometimes inflates when it makes its guttural call.

The African ground hornbill, Bucorvus cafer, inhabits the African savanna south of the equator. Ground hornbills prefer steppes and savannas with a fairly low grass growth, which makes the search for food easier.

Territory size for the African ground hornbill is up to 39 square miles.

The African ground hornbill’s food consists largely of small vertebrates and larger insects, although they sometimes use their pick-like bills to subdue prey as large as hares, tortoises, snakes and squirrels. In the Zoo they are fed Bird of Prey, a commercially produced diet, and dead chicks.

Ground hornbills need thick trees for their nests. They are the only hornbills that do not wall in their nest holes. The female does not seal the nest although she sits throughout incubation and is fed in the nest by the male. She also does not completely molt as smaller hornbill species do. She molts in steps so that she is still able to fly.

The clutch consists of two eggs and is incubated by the female for a month. The young remain in the nest for three months and are then fed by the parents for an additional nine months. The young remain with the family unit until they reach sexual maturity, after about three years.
Most hornbills are monogamous. In species such as the African ground hornbill, cooperative breeding has developed in which some individuals, usually males, although sexually mature, do not breed but help a dominant pair to rear their young.

The Masai believe that the African ground hornbill should never be killed because it will bring bad luck. If one lands on the roof of a house, the occupants must move at once or they believe death will ensue.

Many tribes in Africa believe that the African ground hornbill is a rain prophet. The Koffirs, of South Africa, took this theory one step further. In times of drought, the medicine man would order the bird be killed, after which it gives off a strong offensive odor. The dead bird would be thrown into the river, which was supposed to make the river sick, causing heavy rains to come and wash the stench away.

More Info
We're Open! Group size will be limited to no more than 10 people. Reservations are not required.Learn More
+
Aloha! To make this site work properly, we sometimes place small data files called cookies on your device. Most big websites do this too.
Accept