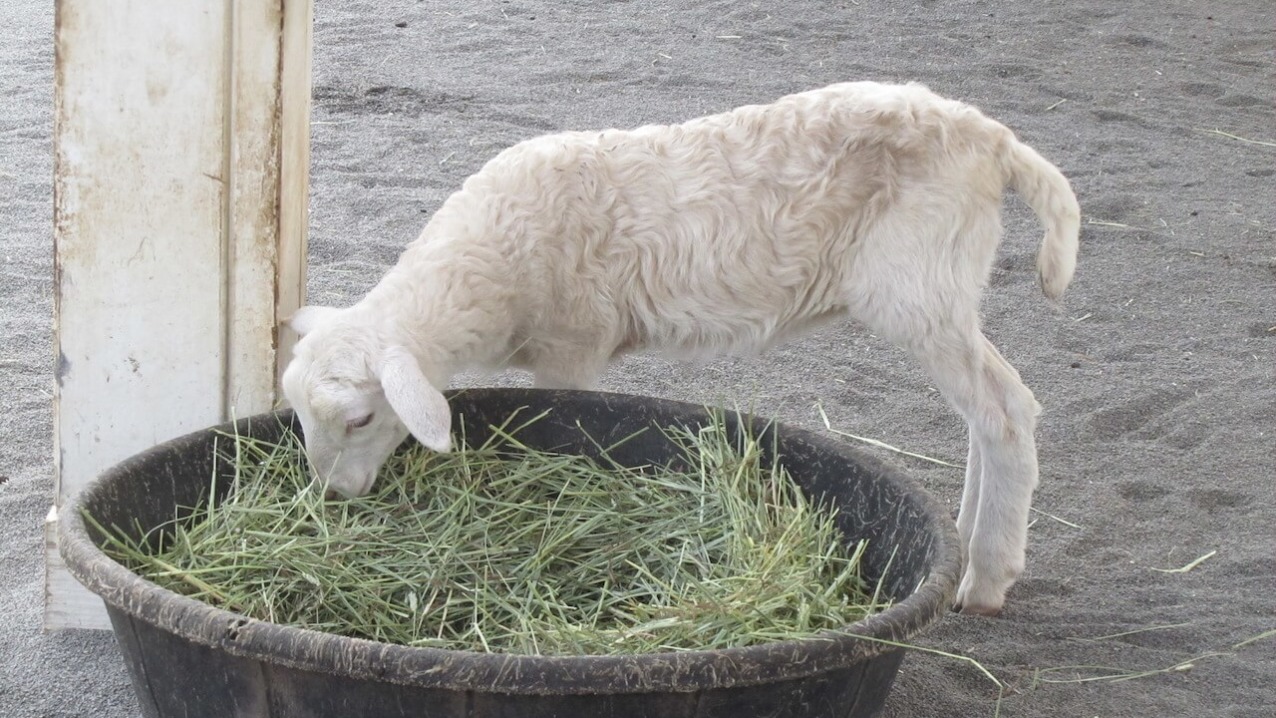 Domestic sheep vary greatly in size. Females (ewes) of some breeds may weigh as little as 100 pounds; others may weigh more than 200. The males (rams) of any breed are considerably larger. Unlike goats, sheep have no beard nor do they have the well-known “goaty” odor. Sheep also have a gland between their toes not found in goats.

Domestic sheep vary greatly in size. Females (ewes) of some breeds may weigh as little as 100 pounds; others may weigh more than 200. The males (rams) of any breed are considerably larger. Unlike goats, sheep have no beard nor do they have the well-known “goaty” odor. Sheep also have a gland between their toes not found in goats.

The horns of a ram usually curve outward. Some breeds, however, are hornless and in other breeds, both rams and ewes have horns. Sheep walk on their hoofs, which are divided into two toes. The upper leg is very muscular enabling the animal to move quickly and easily. Sheep have no cutting teeth on the upper jaw, though they have eight on the lower jaw, plus six grinding teeth on the back part of each jaw.

Sheep are grazers, living on grasses, woods and shrubs. They are also capable of going without water for long periods of time.

The ewe, capable of bearing young once a year after one year of age, carries the developing fetus for about five months. Two days after birth the lamb is already sure footed. Sheep usually live about 13 years.

At the Honolulu Zoo, we have three breeds of sheep, the Merino, the Jacob, and the Southdown.

Merino: The Merino is a fine-wool breed. It has a short head with wool down the forehead and sometimes descending the nose. Only the rams have horns, which are twisted into a spiral at the sides of the head.

Originating in Spain, but now distributed throughout the world, the Merino is a hardy animal in a dry climate. It has served as a foundation stock for the formation of many breeds and has played a great part in the development of Australia as the greatest wool-producing country in the world.

Jacob: The name refers to the sheep owned by the patriarch Jacob as recorded in the Book of Genesis.

The color changes from black and white in young lambs to a dark rusty brown and white in adults. The proportion of black (or brown) varies, some individuals being almost entirely black, others white with only a few spots. Both sexes are horned, some of the animals carrying two, four or even six horns.

These sheep are alert, intelligent, adaptable and versatile. Their wool is highly regarded, being soft and springy and with an attractive natural color which does not fade. The ewes are prolific and good mothers.

Southdown: The Southdown breed of sheep originated in the hills of southeastern England. These sheep are a short-legged, compact, rather small Down breed. Their head is broad between the ears and their face is short, rather pointed and mouse-colored. They have a dense fleece of white, fine textured wool.

Southdowns are hornless and versatile, adapting to either arid or grassland areas. The quality of their wool is top grade.

Although a stylish and attractive breed, the Southdown walks with a rather swaggering or ambling gait.