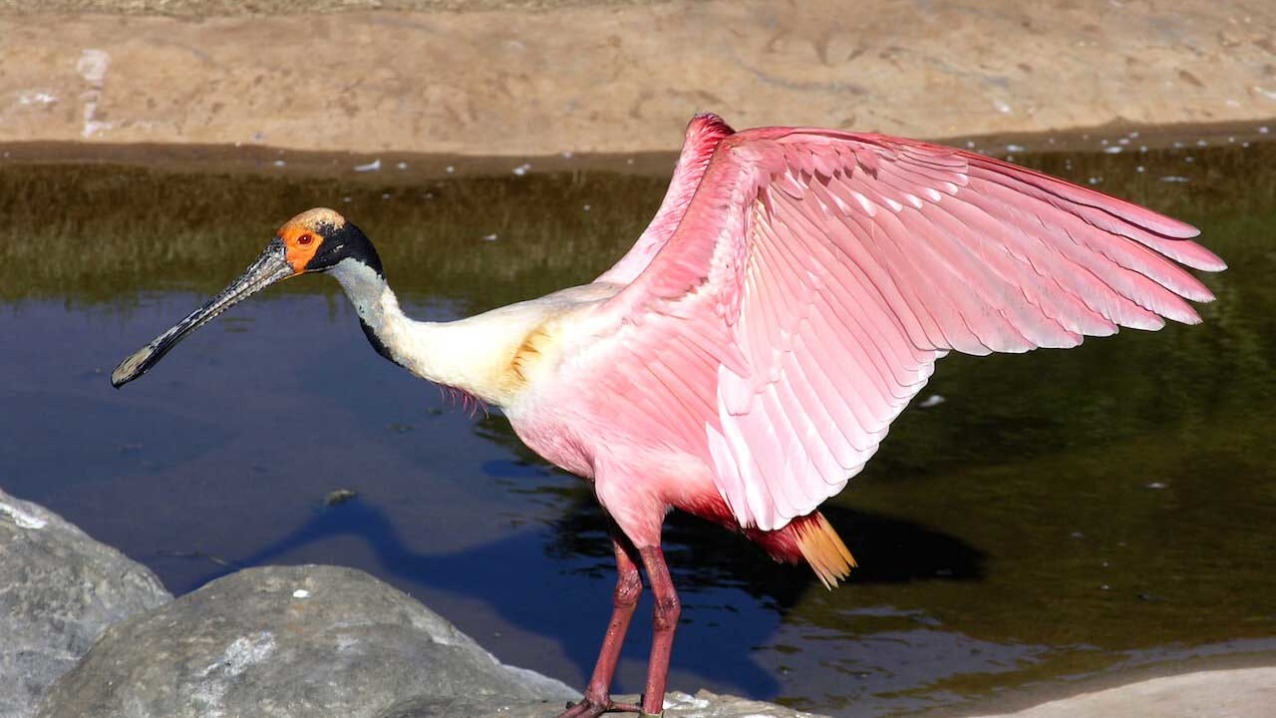 The Roseate Spoonbill stands about 30 inches tall and has a heron-shaped body. The legs and eyes are red, and the feet and knees are blackish. The body is pink. During breeding their plumage can be a bright red or magenta color on their wing shoulders. Wing span is 3-4 feet. The tail is a tawny orange color.

The Roseate Spoonbill stands about 30 inches tall and has a heron-shaped body. The legs and eyes are red, and the feet and knees are blackish. The body is pink. During breeding their plumage can be a bright red or magenta color on their wing shoulders. Wing span is 3-4 feet. The tail is a tawny orange color. On the upper breast there is a prominent patch of stiff curly feathers in red surrounded by pink and buff (a yellowish-orange). The head is bare and varies in color from a pale green to a greenish gray. It has a black skin area around the ear and nape of the neck. They have a long spatula shaped bill, or banjo bill, about 6 inches in length. It narrows in the center and widens to about 2 inches at the tip. Immature birds have white plumage with varying tints of pink.

Of the six species of spoonbills only the Roseate Spoonbill lives in the Western Hemisphere. However, they all inhabit the warmer portions of the world. Roseate Spoonbills range from the Gulf coast of the United States southward to Argentina including the Bahamas, Caribbean, West Indies, and Cuba.

One of the main requirements of their habitat is the presence of shallow water areas in close proximity to nesting and roosting sites. They have been known to feed in salt, fresh, and brackish water. Bays, estuaries, tidal ponds and mangrove swamps are common feeding areas. They nest in wetlands and on coastal islands in low trees, thick bushes, mangroves or reeds, and occasionally on the ground.

The Roseate Spoonbill flies with its head and neck outstretched. The wings beat slow and long. When flying in a flock they generally form a diagonal line. They are shy birds and if disturbed will leave. They forage alone or in small flocks and are colonial nesters.

Small fish such as minnows and killifish make up about 85 percent of their diet with shrimp, mollusks, aquatic bugs, and vegetable material making up the difference. Nerves extend to the tip of the bill making it extremely sensitive. When prey comes in contact with the mandible it stimulates the nerves and the bill snaps shut. They usually feed in water no higher than their knees, and are able to breathe through the nostril slits located high on the base of the bill. They sweep their bill from side to side, an inch from the bottom, in wide semicircles, with the mandibles slightly open. This sweeping motion with their flat bill creates mini-whirlpools. Small animals in the muddy bottom are lifted into the water during one sweep of the bill and are grasped during the next sweep. A series of processes, papillae, on the outside edge of both mandibles assist in transferring the food to the throat.

The minimum breeding age is about 33-36 months. However, most dont mate until their fourth year. The breeding cycle can be divided into four phases; pair formation, betrothal period, copulation and nest building, and hatching and care of young.

Mature spoonbills usually arrive on the breeding grounds about a month before pairing. Immature spoonbills usually do not migrate to the breeding grounds. However, a few might go and stay near the edge of the colony. The female advertises her desire to pair by isolating herself in a tree or bush and shaking twigs or branches in her bill when approached by another spoonbill. The male flies at her, wings beating as he attempts to perch next to her, and nodding his head up and down. Once the female accepts the male they are then considered a pair. During the betrothal period the male will run off other adult spoonbills. He makes no attempt to fight off invasions of other species; the spoonbill is at the bottom of a peck order in a mixed breeding colony. He then offers a stick to the female at the nesting site. She takes it in her bill, shakes her head and lays the stick on the branches at her feet. This is the beginning of the construction of the nest. The male gathers the sticks and the female builds the nest.

Mating begins when the female stands on the nest, leaning slightly forward and shaking a loose twig in her bill. The male watches her then slowly he moves directly behind her. He then reaches across her back to grasp the same twig. The male then mounts the female and firmly grasps the middle portion of her mandibles between his own. The female flattens herself on the nest, the male shakes his head then releases her bill and hops off.

They continue working on the nest until the first egg appears, six days after mating. They average 2-3 eggs per clutch. The incubation period is twenty-three to twenty-four days. The young feed by reaching into the side of the adults open bill at the base. Once the young are able to leave the nest they feed in the nearby tide pools.

From about 1850-1890 there was a drastic decline of the Roseate Spoonbill in the gulf coast of the U.S. This was mainly due to the demand for the plumes of the Egret which share the same colonies with the spoonbill. This disruption led to the desertion of the area by the spoonbills.

Fortunately, due to the conservation efforts by the National Audubon Society and decades of protection from poachers, the spoonbills have come back to the breeding islands of Texas and Louisiana. Florida has had a more difficult time in getting the spoonbills to return to the area, but the population is steadily building. Today the threat is a more indirect one. Human populations on the coastal cities are destroying the Roseate Spoonbills mangrove habitat.