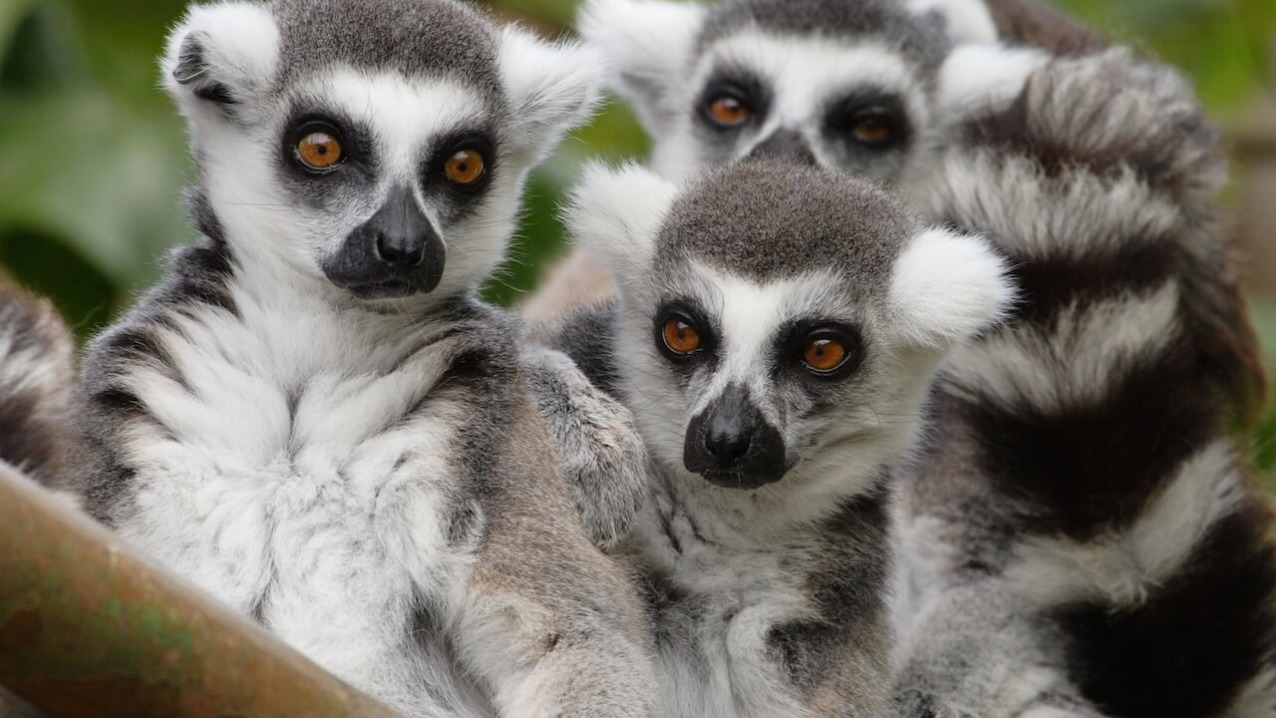 The Ring-tailed lemur is one of twenty-two species of lemurs. They share a common ancestry with Africa’s monkeys and apes, but were isolated from those species probably 50 million years ago when Madagascar separated from the African continent. All lemur species today are endangered due to the rapid destruction of their forest habitat for agricultural development, cattle grazing, and human settlement.

The Ring-tailed lemur, Lemur catta, is one of twenty-two species of lemurs. They share a common ancestry with Africa’s monkeys and apes, but were isolated from those species probably 50 million years ago when Madagascar separated from the African continent.

All lemur species today are endangered due to the rapid destruction of their forest habitat for agricultural development, cattle grazing, and human settlement.

They, like their primate cousinsize=”3″s the monkeys and apes, have binocular forward vision, but must turn their heads to see ahead because their eyes have limited movement in the socket. This gives them a wide-eyed, staring aspect that sometimes startles viewers.

The word Lemur comes from old Latin, and refers to ghosts or spirits. The staring eyes, haunting sounds, and nocturnal ways of the lemur inspired early observers to think of them as ghosts or forest spirits.

The Ring-tailed lemur’s coat is black gray, the limbs and belly lighter, and the extremities white. Their are rings about the eyes, the muzzle is black, the tail is banded black and white.

Lemurs are found only on the east African island of Madagascar. They live in the dry woodland districts with a seven to eight month dry season.

Most lemur species are arboreal. But the Ring-tailed is different in that it frequently uses the ground for travel, more than any of the other lemurs. It is diurnal and gregarious, living in groups of 5-30. Females are generally dominant to males.

Its long, bushy, black-and-white banded tail is used by the species as a visual signal. In aggressive encounters, the Ring-tail will wave its scent-covered tail in the direction of a rival. Loud calls alert other members of the social group to danger and help to maintain comfortable spacing between groups.

Watch the feeding of the ring-tailed lemurs!

Ring-tailed lemurs purr and mew like house cats. It loves to sunbathe with legs and arms spread wide. Living in an arid habitat, it quenches its thirst with juicy fruits. Sitting on its haunches holding fruit in its hands, a lemur delicately bites off pieces with its back teeth so the juice runs into its mouth and not on its fur.

Lemurs are generally herbivorous. Their diets consisting mainly of leaves, fruits, and berries — although they occasionally take bird eggs, small mammals, and insects.

After a gestation period of about 135 days, a single offspring is born. Occasionally they may have twins or even triplets. The young are grayish with a thin coat of hair. The entire group helps care for and play with the young. Young lemurs first begin to climb at about three weeks, and are usually independent by six months. They are sexually mature and fully grown at 11/2 years. In captivity lemurs have lived for 20-27 years.