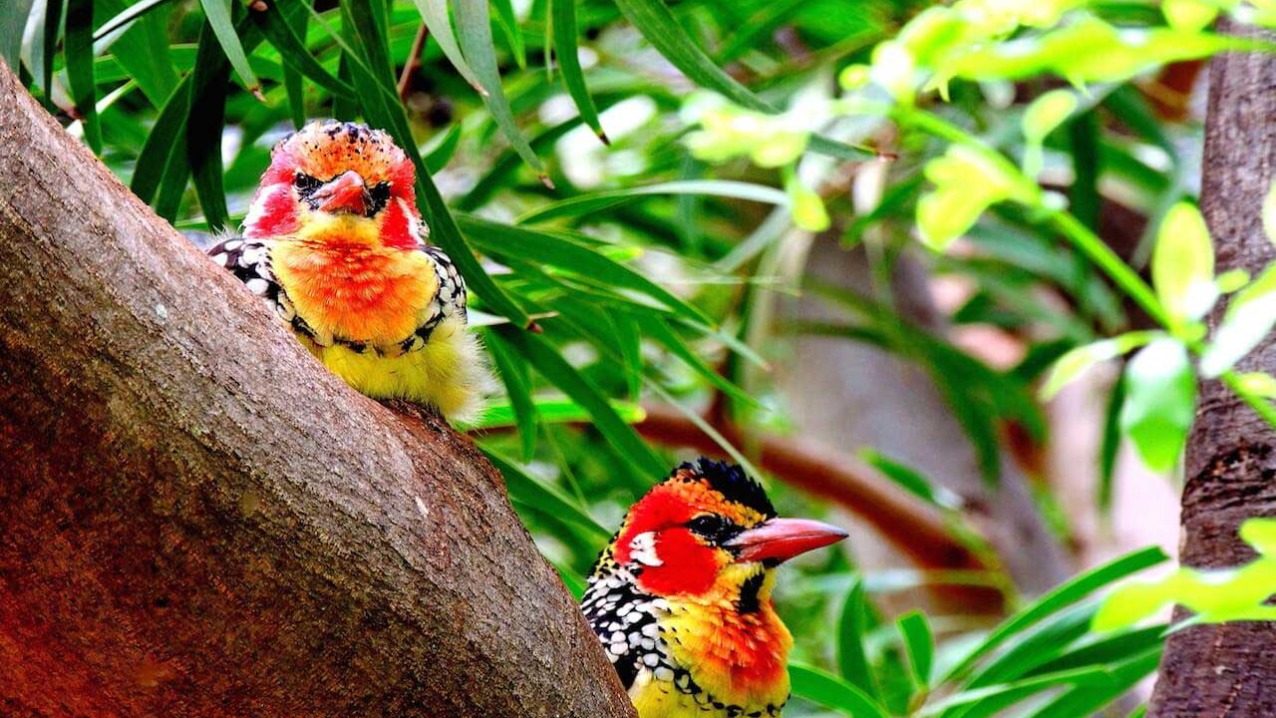 Red-and-yellow barbets have strong red bills that are long, thick and pointed. They are 9 inches (23 cm) long (woodpecker-like in appearance) and strongly patterned with blotches and spots of red, yellow, black and white. They have large red to red-orange heads. Their forehead to hind crown are jet black ending in a slight crest.

Red-and-yellow barbets have strong red bills that are long, thick and pointed. They are 9 inches (23 cm) long (woodpecker-like in appearance) and strongly patterned with blotches and spots of red, yellow, black and white. They have large red to red-orange heads.

Their forehead to hind crown are jet black ending in a slight crest. They have white ear patches and the upper part and necklace are black with round white spots. The breast is orange to red-orange, the lower part of the body and sides are bright yellow. The male has a black chin stripe.

Red-and-yellow barbets are found in low woodlands, savannas and scrubby areas where terrain is rugged and semi-arid. Their range is from central Ethiopia south through Kenya, in north and central Tanzania and southwest Somalia.

The red-and-yellow barbets usually occur in pairs or groups of 3 to 10 birds. These birds will mostly forage on or near the ground often near bushes or under trees that can provide cover. They will also forage along the walls of native huts and will also clean the remains of insects from auto tires and radiator screens.

They have an investigative and confiding nature and will readily enter houses or cars looking for food. They will easily adapt to humans if not harassed. The Masai often used their beautiful feathers for ornamentation.

Loud duets with a long bubbling medley are a characteristic sound of the bush land habitats. The duet sounds like it’s English name, red ‘n yellow, repeated over and over. Duets are usually sung by the dominant pair, however other members of the group may join in for a short time. The singing pair occupy the uppermost branches and if other members move up or in-between the two singers, they will be forced back down. The duet also serves as a territorial song to other outside groups. Once you hear this bird sing you never forget it.

They are omnivorous, eating fruits, seeds, small birds, insects such as centipedes, beetles, grasshoppers, locusts termites and ants. If the bird is tame it will eat bread, cereal and ground beef; readily trying most prospective food items.

Pairs often have several sub adult helpers of either or both sexes. The group may contain as many as 4 adults and 5 younger birds, with the average group size being 3 to 5 individuals. Helpers will roost with the main pair or excavate holes nearby.

The nest is made by tunneling about 16″ (40 cm) into a termite mound, stream bank or road cut. At the end of the tunnel is a chamber which will contain a few pieces of grass and several barbet feathers. They usually lay 4 or 5 eggs which are incubated by the parents and helpers. In captivity the males does much of the incubating.

The young are fed mostly insects. The parents and helpers will smash larger insects such as centipedes or grasshoppers and will remove the legs and wings before feeding them to the young. Once fledged, the family group will stay close together while the helpers will feed alone or in twos at some distance from the main family until the young are completely independent. They will all still come together quickly if an alarm call is given.

The surviving young will act as helpers in later nestings.