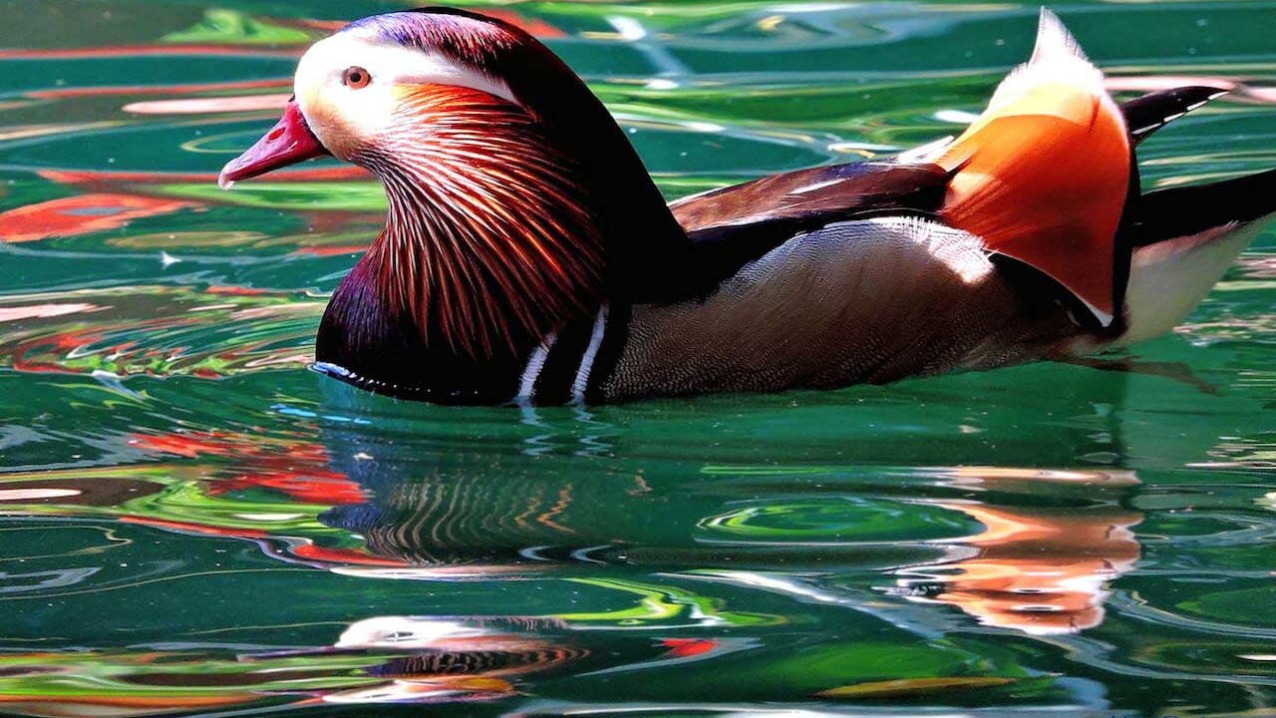 The average length for the Mandarin Duck is between 43-51cm, wings folded 22.1-22.6cm. They have a tail length of 10.2-10.4cm and an average bill length of 27.9mm. In full plumage, the male Mandarin is the most beautiful of all ducks. The males have an iridescent crown extending to a long crest and chestnut cheeks.

The average length for the Mandarin Duck is between 43-51cm, wings folded 22.1-22.6cm. They have a tail length of 10.2-10.4cm and an average bill length of 27.9mm. In full plumage, the male Mandarin is the most beautiful of all ducks. The males have an iridescent crown extending to a long crest and chestnut cheeks. The breast is maroon with black and white vertical stripes; the abdomen and underside are white with gold and black flanks. The back and tail are olive brown, the upper tail coverts are blue/green, and the scapulars are iridescent blue. The outer tertials are orange and gold on the inner web and form a sail shape and the upper wing surface is mostly olive brown. This sail shape feature along with the white-eye stripe that extends from the bill and tapers toward the back of the head distinguishes the male from all others. Their bill is red and they have whitish legs with yellow feet.

The females, however, are less colorful. Their color vary from gray and white, to brown and greenish brown. The crown and sides of the head and neck are gray with a white-eye ring and streak that tapers off towards the neck. The throat and fore neck are white and the breast and sides of body are buff and gray. The back is gray brown and there are a series of white spots on the under parts. The wings are similar to the males but without the sail feathers. The bill is grayish black and the legs and feet are reddish yellow. The female bears a strong resemblance to the female Wood Duck but can be distinguished by the narrow eye stripe; the Wood Ducks is shorter and more blunt. Differences between the sexes are obvious, the males have a crested head and chestnut/orange wing and sail feathers that are raised vertically above their back. The females are duller in color and lack the crested head. The juveniles resemble the females but the males have a pinkish bill. During molting periods when the Mandarin sheds its feathers, the males resemble females but can be distinguished by the red bill.

The Mandarins diet consists of seeds, acorns, grain, aquatic plants, insects, land snails and fish. The diet is seasonal, in the fall acorns and grains are favored while in the spring insects, snails, fish and vegetation are preferred. During the summer months dew worms, grasshoppers, small fish, frogs, mollusks and small snakes are preferred.

The Mandarin Duck originated in China but can be found almost anywhere there is a suitable habitat. They are believed to be semi-migratory and semi-colonial. They are scattered throughout Southeast Russia, Northeast China, Japan, Southern England and Siberia. Mandarins were introduced to the west for breeding purposes by aviculturalists and can be found in zoos around the world. The fall migration ranges from China, Japan, Manchuria, North Korea, to the central and southern islands east of the Sea of Japan. Mandarins prefer to live in woodlands next to water that has many trees with holes for nesting. They favor mountain areas with streams, marshland and forests.

The calls of the Mandarin sound similar to ge,ge, wooing and bifu. The Mandarin Duck hunts by head-dipping in shallow waters. In the wild, Mandarins will forage for their food. Feeding occurs during both day and night, but during the daytime they spend much of their time in shady areas.

Males display an aggressive courtship flight for females. They are also one of the few who guard hens and ducklings until the ducklings are able to fly. Mandarins are highly social but males have been observed spontaneously fighting with one another. The male produces a nasal; whistling note during display, whereas the female makes a high pitched courtship call that sounds like “keet”. The male also makes a high-pitched staccato bark, a barely audible whistle and heard least often, is the grunting sound, similar to that of a wild pig.

Courtship begins in the fall and involves very elaborate, complex behavior such as shaking movements, display drinking and preening. Females take the initiative in choosing their mates by inciting behavior toward the preferred male. She will initiate copulatory behavior by performing head pumping movements then extending prone on the water. The male performs bill dipping movements before mounting and then swims away from the female while orienting the back of his head in her direction.

If the same partners are still alive through two breeding seasons, they typically re-form old bonds rather than establish new ones. Because of their devotion to one another, they are regarded in China and Japan as a symbol of love, happiness and marital fidelity. In early summer their molting period begins and ends around late September. During the molting period they typically seek protection of forested lands or areas well hidden by heavy branches. The females molting period is determined by her condition at the time. If she is nesting the molt is delayed. Fortunately the males loss of color acts as a camouflage and protects them from predators.

Nesting is done in tree holes typically situated over water. The nest hole is lined with down with an average clutch size of 8-10 eggs. The eggs are 56mm X 42mm with color variations of glossy buff to ivory. The mother sheds her own feathers to cover her eggs so she can feed or rest. She is very protective of both her ducklings and her eggs. The mother will decoy predators away from the nest. The male plays no part in the incubation process, which lasts about thirty days.

When the ducklings hatch they instinctively follow their mother and tumble to the ground from the nest-hole in their tree. Amazingly, the chicks land unhurt. Newly hatched ducklings are difficult to observe because the females are very protective of her brood. When the ducklings are feeding the mother stands guard a short distance away. If she senses danger she will lead the ducklings to shelter; diving underwater and swimming until they reach shelter in the long grass of the riverbank or lake. If a predator is present, the mother will feign injury in an effort to distract the predator and lead it away from her brood. The ducklings are usually able to fly in time for fall migration. Despite the protectiveness of their parents, half or more of the ducklings do not survive the first two weeks of life.

The Mandarin Duck is not listed in CITES as an endangered species, but can be considered as near threatened or of special concern. They are listed as Class II key state protection animals of China. Worldwide population status is unknown. The current Asian population may be under 20,000. In various parts of southern England small, well-established feral populations exist, thriving in Virginia Water on the Berkshire/Surrey border. In Russia, feral numbers are unknown, but there are one hundred fifty reserves throughout the country that provide homes for Mandarin Ducks, as well as other endangered or threatened species in the hopes of the population increasing. Feral populations also exist in Scotland and parts of northern Europe.

The decline of the Mandarin Duck can be blamed mostly on humans; mainly loggers, hunters and poachers. The destruction of their habitats by loggers and clearing of the forests has had a severe impact on the wild populations. Many hunters are unable to recognize them in flight and mistake them for other legally hunted ducks and most likely, due to the males extreme beauty, poachers prize them. Because of their bad taste, these ducks are not hunted by humans for food.