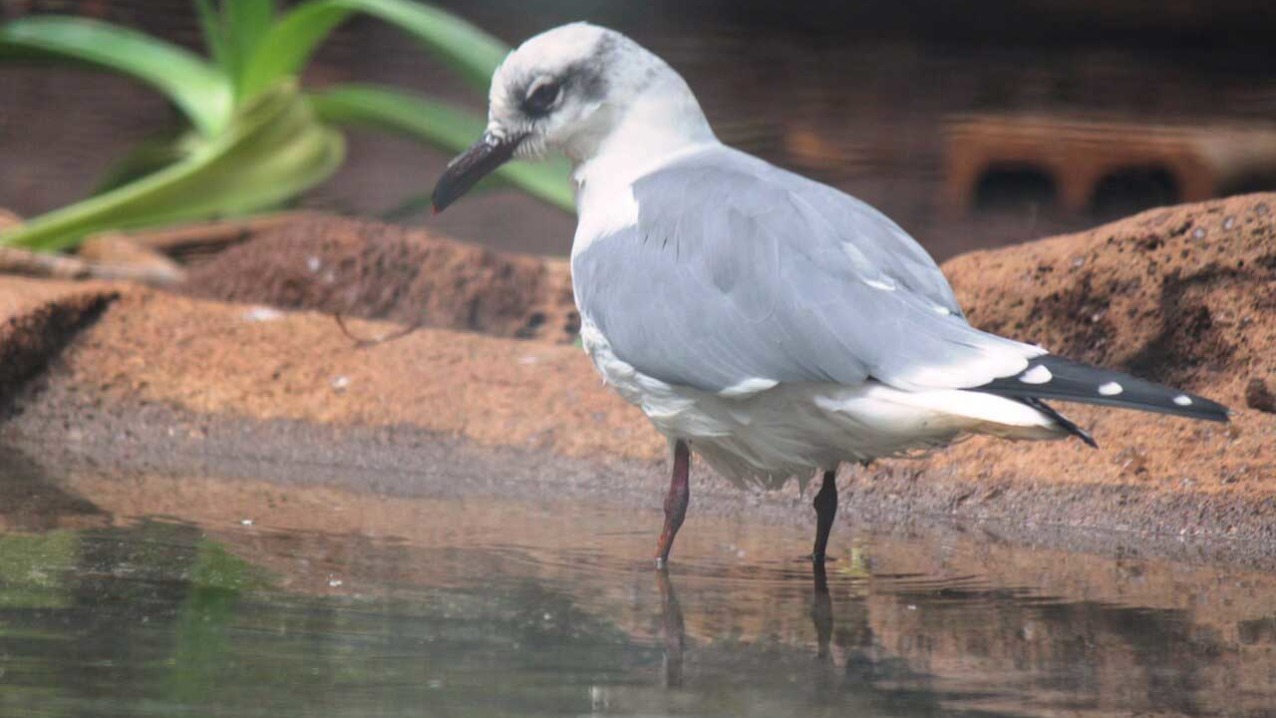 The Laughing gull is about 16 inches in length. Its white body is covered by a slate-gray mantle and nearly black hood which extends further on the throat than on the back of the head. During the breeding season its breast has a faint rose blush. Laughing Gulls lose their dark feathers during the fall molt and are white-headed in winter.

The Laughing gull is about 16 inches in length. Its white body is covered by a slate-gray mantle and nearly black hood which extends further on the throat than on the back of the head. During the breeding season its breast has a faint rose blush. Laughing Gulls lose their dark feathers during the fall molt and are white-headed in winter.

The Laughing Gull always feeds near the sea. Its diet is comprised largely of fish and marine animals picked from beaches, estuaries and salt marshes. It will, however, eat almost anything edible. The Laughing Gull is not a good fishermen and rarely catches live food from the sea unless its prey is crippled. But it is a good thief, often robbing pelicans and terns of their catch. It will even land on a pelican’s head as it emerges from a dive to pluck food from the larger bird’s bill. The Laughing Gull is a useful scavenger, and performs a useful service around harbors and beaches cleaning up fish stranded by the tide and any edible garbage they can find.

Laughing gulls live mainly on the Atlantic and Gulf Coasts of the United States, ranging from Maine down through Florida and Texas.

The Laughing Gull is named for its call, which sounds like, “ha, ha, ha, ha.” It’s a sociable bird that migrates, rests, hunts and scavenges together. Noisy, quarrelsome and aggressive, they often steal the prey and feed on the eggs and young of other birds, including those of their own species.

Because gulls are so conspicuous around harbors and beaches, they are one of the most familiar of sea birds. Although they are often referred to as “sea gulls,” they seldom are found far at sea.

Laughing gulls prefer to nest in tall, thick grasses or shrubbery, usually on sandy islands, along the Atlantic Coast. Its compact breeding colonies may consist of thousands of birds. In the north the nest is substantially built of grasses and weeds, but farther south a mere hollow in the sand often will suffice.

Laughing Gulls lay two or three brownish eggs, which are speckled with darker spots. Both sexes help in incubating the eggs. If the clutch is lost, the female gull will quickly lay again –another survival mechanism– replacing her lost broods, if necessary, as often as three or four times.

The young hatch in three or four weeks, their grayish down dotted with black. Although they are able walk soon after hatching, they tend to remain in or near the nest until they are fairly well grown. Predation takes a heavy toll on the young, and only one in five hatchlings is like to reach eight weeks of age, a time when it can finally fly.