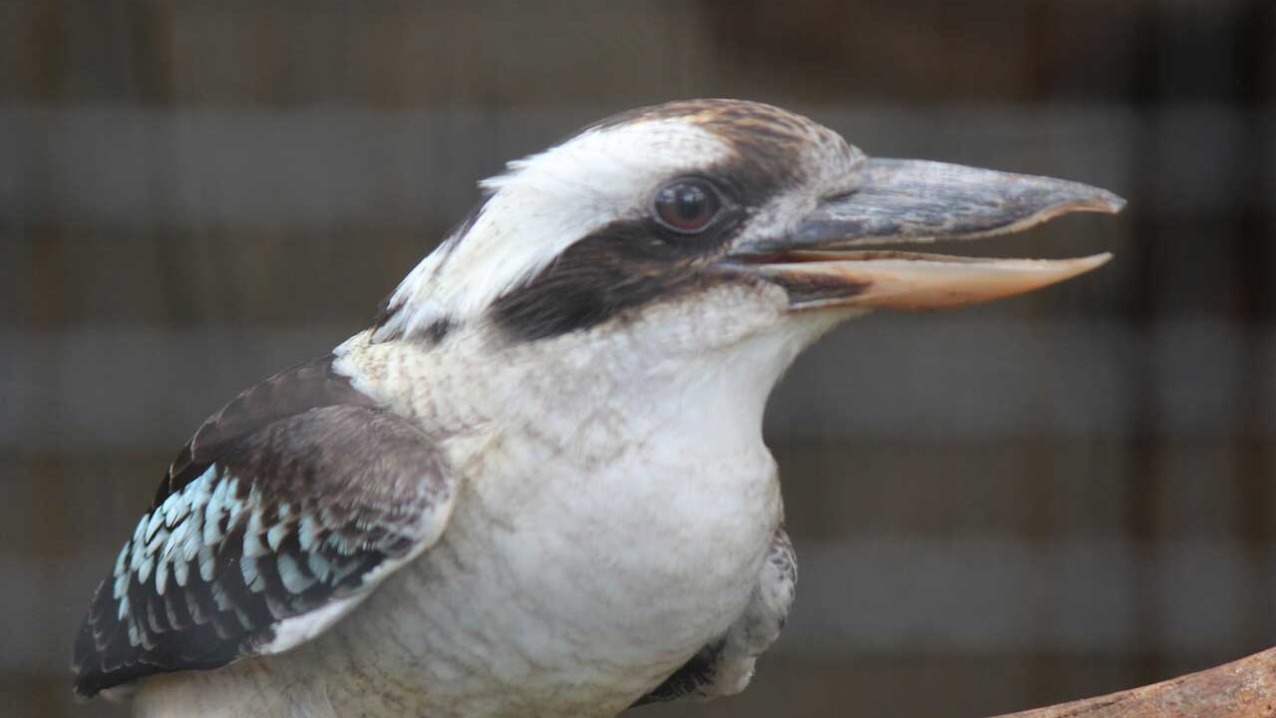 Kookaburras, known as the Laughing Jackasses of Australia, are from the family Kingfishers. Similar to other kingfishers, Kookaburras have a stout and compact body, short neck, rather long and pointed bill and short legs. Kookaburras are 17 inches in height, the upper parts dark brown, the wings spotted gray-blue.

Kookaburras, known as the Laughing Jackasses of Australia, are from the family Kingfishers. Similar to other kingfishers, Kookaburras have a stout and compact body, short neck, rather long and pointed bill and short legs.

Kookaburras are 17 inches in height, the upper parts dark brown, the wings spotted gray-blue. A white band separates the head from the body. There is a dark stripe through the eye, and the under parts are white. The strong bill is black.

In the wild, Kookaburras are known to be partial to the young of other birds and snakes, as well as insects and small reptiles. In the Zoo they are fed commercially prepared Bird of Prey mix and dead baby chicks.

The Kookaburra’s rolling, laughing call is one of the best-known sounds in the animal world. The birds raise a wild chorus of crazy laughter as they go to roost in the treetops at dusk, and again wake everyone within hearing just as dawn breaks, so regularly that in the hinterlands of Australia they are know as the “bushman’s clock.”

Australians value the Kookaburra, not only as an intriguing member of the strange fauna, but for its habit of feeding on snakes and lizards. The Kookaburra seizes snakes behind the head and kills them by dropping them from a height, or else carries them to a perch and batters them senseless with its big bill before swallowing them.

Less welcome is the Kookaburra’s fondness for the young of other birds, and its occasional raids on farmyards for ducklings and baby chicks.

Kookaburras generally live in pairs or in small groups in open woodland. They incubate their two to four pure white eggs in hollow tree trunks, tree holes, or in excavated termite nests. Both adults incubate for a period of 25 days. The young leave the nest 30 days after hatching, but the parents continue to feed them for another 40 days.

The Australian aborigines have a legend about the Kookaburra. When the sun rose for the first time, the god Bayame ordered the kookaburra to utter its loud, almost human laughter in order to wake up mankind so that they should not miss the wonderful sunrise. The aborigines also believed that any child who insulted a kookaburra would grow an extra slanting tooth.