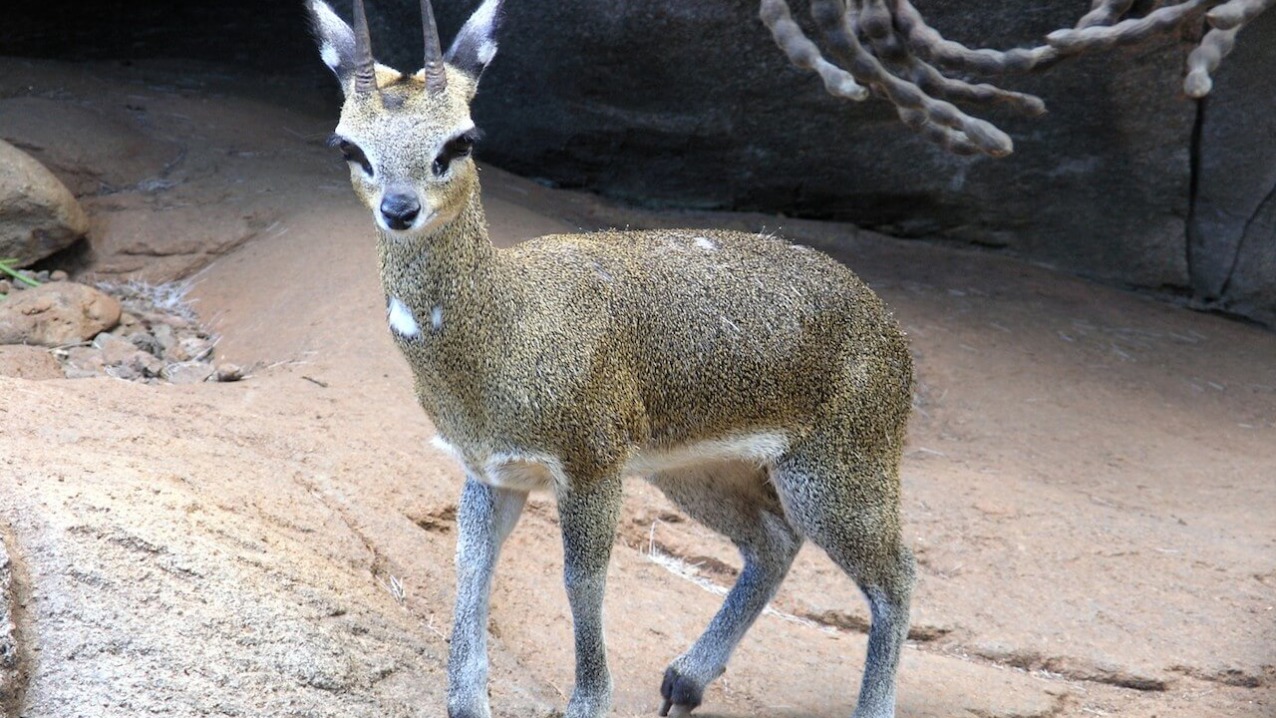 The Klipspringer (Afrikaans for “rock jumper”) is only about twenty-two inches high at the shoulder, and weighs approximately forty pounds. Stocky and powerful, yet extremely agile, this shy and nervous antelope is unique. The male has delicate little horns about four to six inches long. Its ears are actually longer than its horns.

The Klipspringer (Afrikaans for “rock jumper”) is only about twenty-two inches high at the shoulder, and weighs approximately forty pounds. Stocky and powerful, yet extremely agile, this shy and nervous antelope is unique. The male has delicate little horns about four to six inches long. Its ears are actually longer than its horns.

Its coat is thick, dense and hard, with a speckled “salt and pepper” pattern of an almost olive shade. The coat harmonizes with the background of rocks. Its eyes are large and widely spaced, and its nose is short and wedge-shaped.

All hoofed animals walk “on the tips of their toes.” Among these the klipspringer is the only one to touch the ground with only the very tips of its vertically rising hooves. Translated into human terms, this would mean that a dancer would dance on the tips of her toe nails rather than the tips of her toes. The hoof tips, though blunt, are also quite narrow and hard-edged and thus dig into loose surfaces. A klipspringer’s gait is also said to increase friction with the rocky surfaces, thereby providing better footing up or down vertical cliffs.

The best places to look for klipspringers are the kopjes of the savannas, rocky prominences that jut up from the plains, islands of stone anchored in seas of grass. Its home is in Africa, from the Cape region in the south up through eastern Africa to Abyssinia.

Klipspringers are strictly monogamous, and are usually seen within a few feet of their mate. The basic pair behavior relative to predators is that, while one klipspringer eats, the other acts as a lookout. Males are strongly territorial, and it’s territorial dominance extends over five to ten acres.

Klipspringers love to nibble the secretion from each other’s face, which in both sexes exudes from the pre-orbital glands and dries up quickly. Both males and females also mark with it. The klipspringer is as surefooted as a mountain goat, and when it is pursued it leaps from crag to crag and seems to bound up the side of a steep cliff as if it were flying.

The klipspringer’s alarm call is a loud whistling through the nose. When they are fearful and distressed they make roaring sounds with their mouths open. During mating, the males hum briefly and softly.

The Klipspringer eats rock plants, especially succulents. It never drinks water, but absorbs what liquid is necessary by eating succulent leaves or by licking up the dew in the early morning.

Wild klipspringers are found mostly in pairs, although occasionally there are singles. The mating season is probably an extended one, but most of the young appear to be born from September through January. The gestation period is about 214 days.