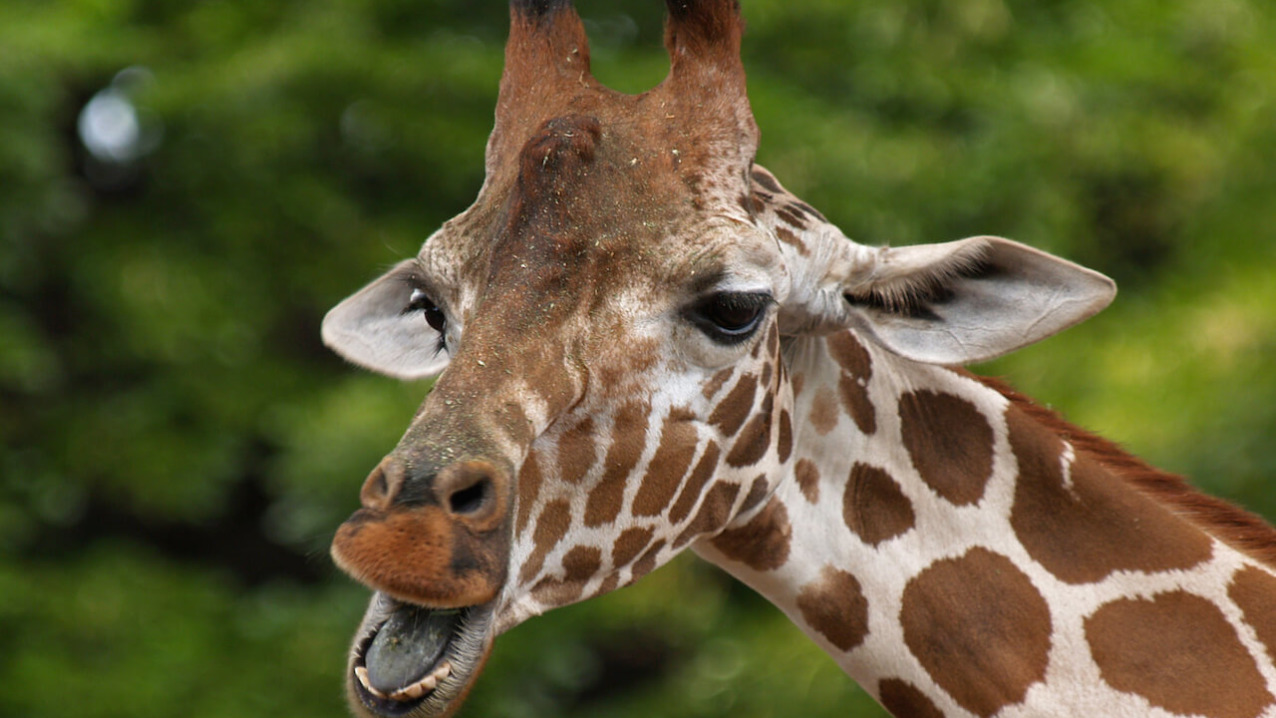 The Giraffe is the tallest animal in the world. Males may be 16-18 feet tall and weigh up to 2,000 pounds. Females are usually lighter and about two feet shorter. The giraffe’s front legs are only slightly longer than the back ones, the height of the fore part of the body being largely due to the heavy muscular development of the base of the neck.

The Giraffe is the tallest animal in the world. Males may be 16-18 feet tall and weigh up to 2,000 pounds. Females are usually lighter and about two feet shorter. The giraffe’s front legs are only slightly longer than the back ones, the height of the fore part of the body being largely due to the heavy muscular development of the base of the neck.

The long neck has the usual seven vertebrae of most mammals, although each is greatly elongated. The giraffe’s soup-plate-sized hooves are used as offensive weapons, usually in the defense of the calves. The powerful kick from the front feet can kill a lion.

The giraffe is one of the few ruminant born with horns. Both sexes have horns which are covered with skin. The horns of males are thicker and heavier and are used in fights between males.

The giraffe’s incisor teeth are splayed out in two or three lobes to comb the leaves off shoots. Their long black tongue, which can be extended 18 inches, is used to gather food into the mouth. To compensate for the sudden increase in blood pressure when the head is lowered, the giraffe has very elastic blood vessels and valves in the venous system of the neck.

The Nubian giraffe’s color scheme varies considerably in pattern, but consists of dark-reddish to chestnut brown blotches of various shapes and sizes on a buff ground color. The coloration darkens with age.

Giraffes inhabit savanna country where there are Acacia and climbing leguminous plants. They are found in Africa south of the Sahara to Cape Town. The reticulated giraffe is found in East Africa.

Giraffes can rest standing, but they often lie down with their legs folded beneath them. The neck is held vertical except during short periods of sleep, usually about five minutes duration, when the head is rested on the rump. When giraffes walk they swing the two legs on the same side of the body at almost the same time. When galloping, the hind legs are brought forward almost together and placed outside the front. Maximum galloping speed is 31-37 mph.

Giraffes form scattered herds. Being a gregarious animal, individuals band together into loose groups for protection against predators. Home ranges in giraffes are large, about 46 sq. miles for adult cows, but smaller in mature bulls, and larger in young males.

Bulls are non-territorial, and amicably coexist together within overlapping home ranges. Each individual knows its relative status in the hierarchy, which minimizes aggression. Young males have developed an elaborate ritual, called necking, to determine dominance. The necks are slowly intertwined, pushing from one side to the other, rather like a bout of arm-wrestling in humans.

Giraffes are highly selective feeders, the bulk of their diet comprising the leaves and shoots of trees and shrubs, supplemented by climbers, vines and some herbs.

Female giraffes conceive for the first time in their fifth year. With a gestation period of 15 months, a mean interval between births of 20 months, and a maximum longevity of 25 years, a cow may produce up to 12 calves in her lifetime.

Newborn calves usually stand 6 feet and weigh approx. 150 lbs. After being dropped about 6 feet to the ground, they stand on wobbly legs about 20 minutes after birth and begin to nurse within 1 hour. Male calves are weaned at about 15 months, female calves a couple of months later.