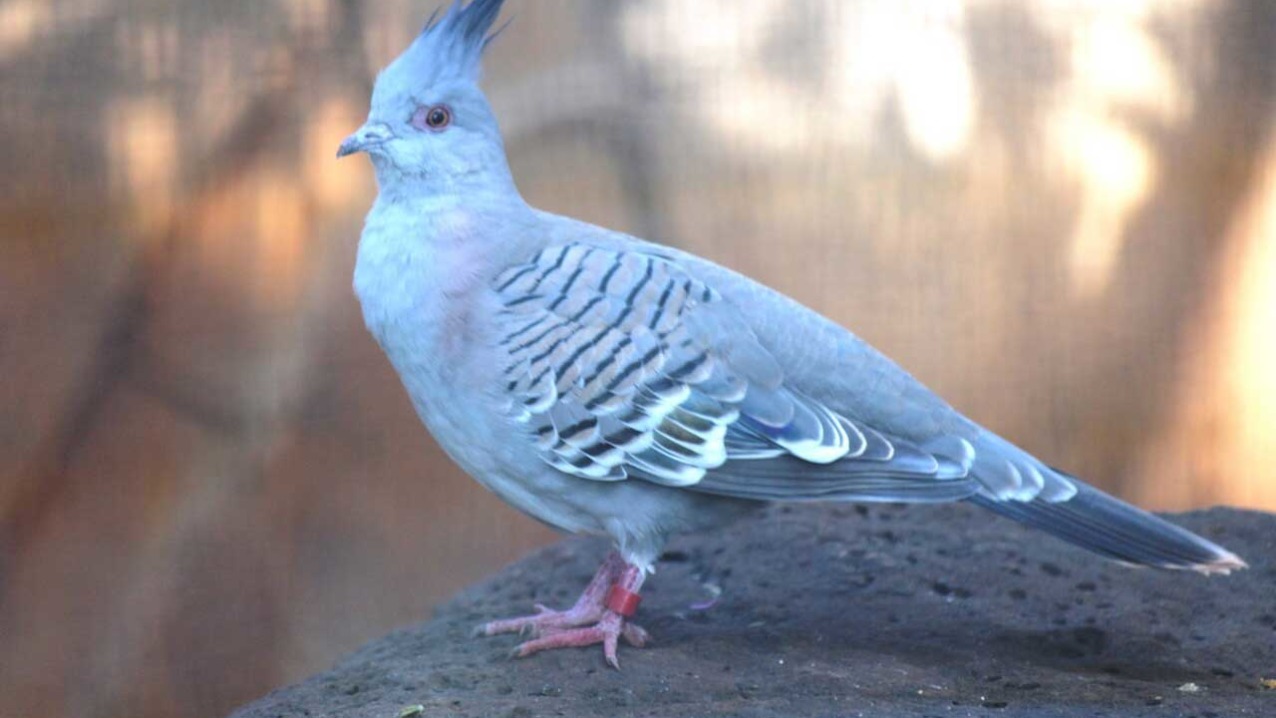 Crested Pigeons are quite abundant and can be found in most of Australia except in the areas of heavy rainfall. The preferred arid habitat is an open woodland containing shrubs, trees and is within easy flying distance to surface water. They tend to spend most of their time on the ground yet nest and shelter in trees.

Crested Pigeons range in height between 300-350 mm (Bird World, 1999), and are slimmer than the usual pigeon. It is noted for it’s long, black slender crest prominent at the very top of its head. Rather colorful for a pigeon, its sides of its lower neck and breast are a salmon pink with tints of olive here and there. Its gray wings and black bill are rather short. A Crested Pigeon is mostly gray with the exception of bars of purplish and or blue-green along its wing. Patches of drab brown remain on its under parts. The outer tail feathers are a darker gray with bluish, purplish and green iridescence and a broad white tip. The orbital skin and feet are purplish pink or pinkish red. The iris is orange, yellow or even orange red with a red periopthalmic ring. Strangely, these traits, including the elaborate wing design which would be assumed to be for attracting females during courtship, are found in both male and female species.

Crested Pigeons are quite abundant and can be found in most of Australia except in the areas of heavy rainfall. The preferred arid habitat is an open woodland containing shrubs, trees and is within easy flying distance to surface water. They tend to spend most of their time on the ground yet nest and shelter in trees.

Crested Pigeons are usually seen in pairs but may also occur in flocks of thirty to up to a thousand or more. Whenever they come to water, which is usually a half hour after sunrise, they hesitate. They make distress calls until a brave bird inches its way out to the water. As soon as that bird proves the situation to be safe, the rest proceed to the water. Crested Pigeons also has the ability to suck water rather than having to throw its head back to swallow. Nervousness is usually showed by a “hitching up” of a wing and usually occurs at times of conflict or when disturbed by humans.

Crested Pigeons have a diet consisting of mainly small insects, green vegetation, small bulbs, and seeds. These seeds are mostly from herbaceous plants including Acacia trees. However, recently they have been found eating exotic seed crops and introduced weeds as well.

Crested Pigeons tend to breed any time of the year but mostly spring and summer. Their nest is normally in a platform of twigs located in a tree or a bush.

First the male begins his courtship dance by bobbing his head up and down and proceeds as it spreads and raises his tail and half expands its wings. Advertising a low coo he continues next to display his iridescent green feathers, tilting them to shimmer in the sunlight. Once a female is attracted, the male then proceeds to throw the female out of the nest until she returns enough times for the male to finally accept her. At the sign of acceptance, the female hops around dancing, this is a sign that the two are united. At this point, they begin to excessively caress each other in time spans of a half an hour at a time. From this point on, no other pigeon is allowed near the nest. This courtship display is a biological isolation mechanism indicating mating only between the same species. Once the female recognizes the male of the species there are physiological changes. An example is ovulation of the female at the sight of the male’s display.

The female produces two smooth white eggs at around 33mm x 24mm in size. Incubation lasts from 16-18 days. The young fledge around 16 days old looking like miniature version of adults, equipped with colorful markings. In three months the young are fully grown.

The Crested Pigeon is very common and not at all endangered. This could be due to the fact that they have no major threats and have the ability to eat even exotic seeds and introduced weeds. They are so common in Australia that they are hunted as game bird.