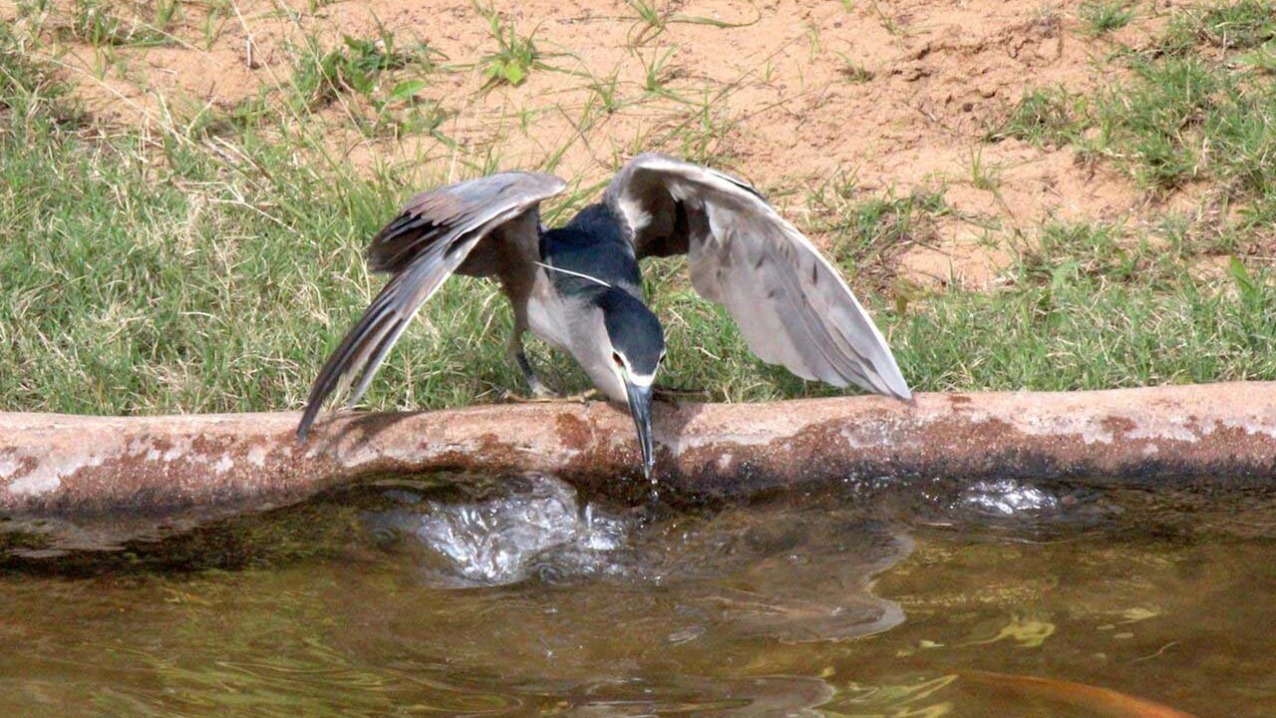 The Black-crowned Night Heron (‘Auku’u – in Hawaiian) is an attractive bird to watch. They look like dark silhouettes as they fly with steady beats of their broad wings. As nocturnal feeders, night herons are not be seen often by people. This heron has a stocky, chunky body with short, strong legs and neck, and large red eyes.

The Black-crowned Night Heron (‘Auku’u – in Hawaiian) is an attractive bird to watch. They look like dark silhouettes as they fly with steady beats of their broad wings.
As nocturnal feeders, night herons are not be seen often by people. This heron has a stocky, chunky body with short, strong legs and neck, and large red eyes. The body of the black-crowned night heron looks as if it is hunched over, or squat shaped with its head usually tucked down into its shoulder. When in flight, the heron tucks its neck in close to the body and rarely extends it. They have a short thick sharp pointed black bill. The body of an adult Heron is 58 – 72 cm (20 – 28 inches) long.

The sexes are alike except the females are on average slightly smaller. The plumage is gray with a distinctive black cap with a fallen crest of two to three narrow white plumes at the back of the head. The heron has a black back and the face, throat, fore neck and belly are white. During the breeding season, the black feathers from the head and back emit a bluish-green gloss and the legs become red. Wings and tails are blue-gray and legs and feet are usually yellow. . Night herons receive full adult plumage in the third year. Members of the heron family are structurally characterized by having four toes. There are three toes facing forward and one facing to the back.

The diet of the Black-crowned Night Heron depends on what is available, and may include algae, fishes, leeches, earthworms, insects, crayfish, mussels, squid, amphibians, small rodents, plant materials, garbage and organic refuse at landfills. They have been seen taking baby ducklings and other baby water birds. The night heron prefers shallow water when fishing and catches its prey within its bill instead of stabbing it. Herons will sometimes attract prey by the rapidly opening and closing the beak in the water to create a disturbance that attracts its prey. This technique is known as “bill vibrating”.

Black-crowned night herons are found by marshes at night and by day they roost communally. Besides marshes, they inhabit wetlands, like ponds, swamps, tropical mangroves, streams, rivers, mud flats, and edges of lakes. They have even been found in rice fields and other agricultural habitats near water. Larger wetlands will have substantial colonies of black-crown night herons, whereas, they may be seen alone or in small groups by less significant bodies of fresh or salt water.

Black-crowned night herons associate with other species of herons frequently and are socially active all year. These herons have a deep croaking call sounding like “quark”. Adult herons will defend their feeding and nesting area.

Young Herons have an aggressive, regurgitating reaction to discourage intruders. The black-crowned night heron is usually a nocturnal feeder but it will feed during the daytime during the breeding season or when there is a food shortage. The black-crowned night heron is an expert at “still fishing”. It can stand motionless for long periods in shallow water, on pilings, or on floating docks watching and waiting for its prey. A thrust of its bill into the water catches small fish. These herons can also swim when searching for food.

The Black-crowned Night Heron nests in colonies and produce one brood per season. During the mating season the male become aggressive and perform a mating display to attract the female. This consists of the male doing a “snap” display followed by an advertisement display called the “stretch, or “snap-hiss”. During the “snap” display the male walks around in a crouched position, head lowered, snapping his jaws together or grasping a twig. Then the male stretches his neck out and bobs his head and makes a “snap-hiss” vocalization. Twig shaking and showing off may occur between songs. This show motivates other males to show off and display also. The displaying is successful if the male attracts a female to his nest site. At the time of pair formation, their legs turn from red to pinkish color.

Mating takes place near the nest, shortly after pairing. The male begins the “twig’ ceremony by presenting the female with twigs, which she works into a platform nest. The nests usually rest on a fork of a branch, in the trunk of a tree, in deep foliage, or in low bushes, and reed beds. The herons make a flimsy, haphazard, stick platform nest or they just rebuild an old nest. The nest is lined with grass and roots.

After four or five days a clutch of three to five eggs are laid. Both parents share in incubation, which lasts 24-26 days. The eggs are green the first day and become pale blue or greenish days later. On hot days the parents may wet their feathers to cool off the eggs.

Both parents feed the young by regurgitation of food. After two weeks the young leave the nest. They don’t go far and for about three weeks can be found clustered at the top of the trees. By week six or seven they can fly well and follow the parents to the feeding grounds. Adults do not recognize their own young and will accept other young if placed in the nest.

In the 1960’s there was a decline in black-crowned night heron populations due to the use of DDT. The status of the heron population is indicative of environmental conditions, due to their high ranking within the food chain. Many herons are killed each year at fish hatcheries because the birds are considered a “pest” that prey on the hatchery fish.

A healthy, wild ‘Auku’u population exists on zoo grounds. These birds can usually be seen in enclosures that have ponds or moats stocked with small fish.