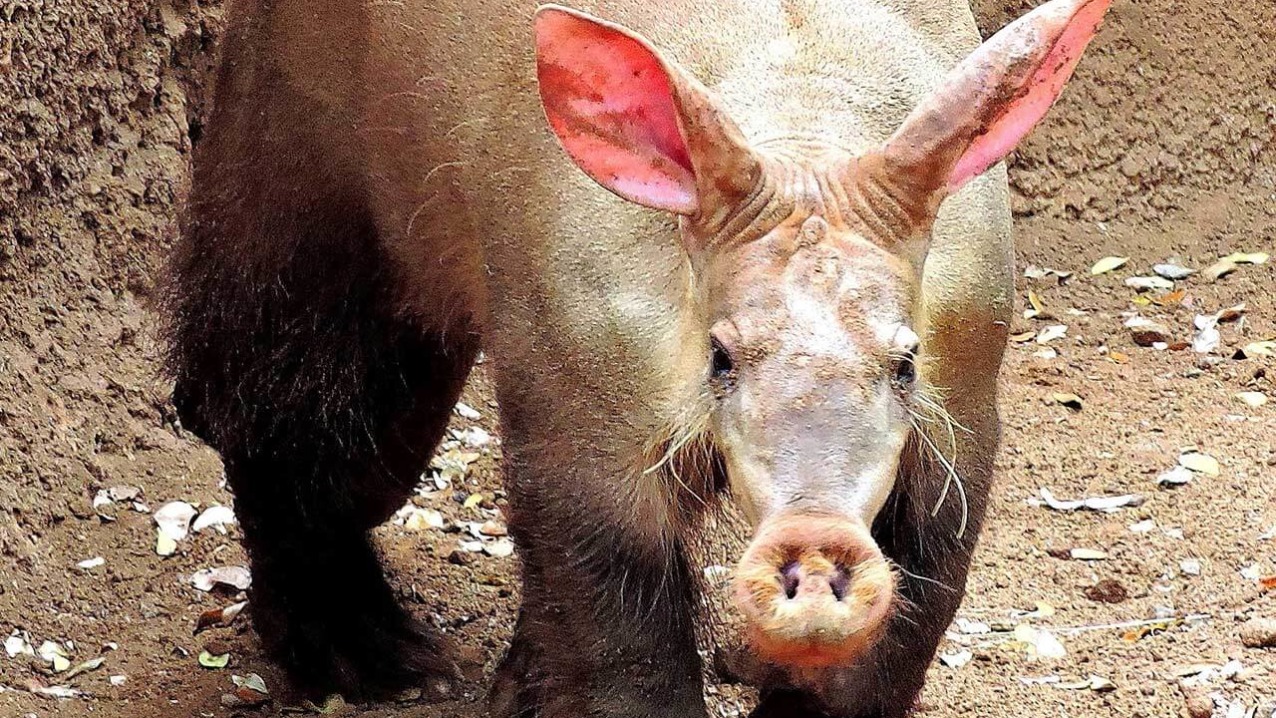 The name aardvark comes from a word meaning “earth pig.” The aardvark is endemic to Africa, meaning it can only be found on the African continent naturally. The last survivor of a group of primitive ungulates, the aardvark could more accurately be called a near-ungulate that has developed powerful claws.

The name aardvark comes from a word meaning “earth pig.” The aardvark is endemic to Africa, meaning it can only be found on the African continent naturally. The last survivor of a group of primitive ungulates, the aardvark could more accurately be called a near-ungulate that has developed powerful claws.

The aardvark has a short neck connected to a massive, almost hairless body with a strongly arched back. The legs are short, the hind legs longer than the front ones. The head is elongated, with a long, narrow snout and nostrils that can be sealed. The long, tubular ears are normally held upright but can be folded and closed. The short but muscular tail is cone-shaped and tapers to a point. The thick claws on the forefeet are well adapted for digging.

They usually weigh between 88 to 143 pounds and can be 24 inches tall at the shoulder. The aardvark has fewer teeth than most mammals. The teeth are columnar in shape, have no roots and do not grow simultaneously.

Aardvarks live throughout Africa, south of the Sahara. Their name comes from South Africa’s Afrikaans language and means “earth pig.”

Aardvarks are found in all regions, from dry savanna to rain forest, where there are sufficient termites for food, access to water and sandy or clay soil. If the soil is too hard, aardvarks, despite being speedy, powerful diggers, will move to areas where the digging is easier

Aardvarks are mostly solitary and nocturnal, but sometimes will come out during the day to sun themselves. When aardvarks sleep, they block the entrance to their burrow, leaving only a very small opening at the top, and curl into a tight ball. Especially during the rains, aardvarks may dig themselves new burrows almost nightly. Many animals, including ground squirrels, hares, civets, hyenas, jackals, porcupines, warthogs, monitor lizards, and birds use abandoned aardvark holes as shelter. When pursued, an aardvark will furiously dig itself a hole, and when attacked, may roll onto its back and defend itself with its large claws or use its thick tail to somersault away from its attackers.

As it is nocturnal and has poor eyesight, the aardvark is cautious upon leaving its burrow. It comes to the entrance and stands there motionless for several minutes. Then it suddenly leaps out in powerful jumps. At about 30 feet out it stops, raises up on its legs, perks up its ears and turns its head in all directions. If there are no sounds, it makes a few more leaps and finally moves at a slow trot to look for food.

Although not thought to be territorial, females seem to become attached to a particular place. The males wander more. Adult aardvarks are usually solitary, coming together only for mating.

Aardvarks give birth to one offspring at a time with gestation lasting about seven months. The pinkish, hairless newborn stays inside the burrow for about 2 weeks and then begins to follow its mother in her search for food. The young first eats solid food at 3 months of age and is suckled until 4 months.

At about 6 months the young male becomes independent and goes off on its own, while the young female stays with the mother until after the next baby is born. The young female may then dig its own burrow a few yards away from its mother but still joins her to forage for termites.
An aardvark can live for 23 years in captivity.

The adult aardvark’s principal enemies are human (who sometimes kill it for meat), lions, hyenas and leopards; pythons also take the young. Aardvark flesh is relished by several African tribes and many parts of the aardvark body are used as charms: the teeth are believed to prevent illness.